Bill Sampe was an industrious business leader with a modern vision for a connected community and a vibrant downtown. He chose to lead by example and was actively involved in the communities where he lived and worked – including Theinsville and Wausau -- with an eye toward economic development.

His goal, in fact, was to retire early and spend a few years as an energetic volunteer. It’s been said he had a “10-year commitment to helping Wausau prosper and grow.”

Bill’s professional career began as soon as he graduated from high school in Manitowoc, Wis., in 1945. He joined the U.S. Navy where he served as an electricians mate first class during World War II.  Following his military service, he decided against pursuing work as an electrician and instead joined Household Finance, Kansas City, Mo., as a collector.  While there he met his wife, LeeAnn (Herman). They married in 1953. The couple raised three children. Their oldest son, Bruce, died at age 22 following a year-long battle with cancer.

After 14 years with the national finance company, Bill joined First Wisconsin National Bank in Milwaukee.  He started by managing the company’s training facilities and went on to serve as a vice president of branch operations. Lee Ann and Bill lived in Theinsville where Bill was an active community servant. He served five years as a trustee of the Theinsville Village Board and chairman of its public safety committee.  He was also involved in the Theinsville-Mequon Lions Club, a member of the Kiwanis Club, and secretary of the Wisconsin Civic Affairs committee.

In 1977, at age 50, Bill was named president of First Wisconsin National Bank in Wausau, succeeding Richard Smith who resigned. In accepting the new position, one of his top priorities was community service.

The family moved north and Bill spent the next 12 years growing the bank business.  Convinced of Wausau’s market potential, in 1986 Bill secured funding for a new bank building.  He worked tirelessly to ensure Wausau residents accepted the demolition of the former Horace Mann Middle School and the construction of the new downtown bank building.  In fact, First Wisconsin National Bank protected and then gave away 4,000 of the bricks from the Horace Mann building.

At the same time he was overseeing the construction of the new building he was serving as president of the Wausau Chamber of Commerce and president and campaign chairman of the United Way.

After retiring as chairman from the now former First Wisconsin National Bank of Wausau in 1987, Bill began working part-time for the Wausau Chamber of Commerce as chairman of Central Wausau Progress, a downtown development taskforce. In the late 1980s he worked closely with city leaders on “Wausau 2000” which included plans for the revitalization of Wausau’s downtown, including the Wausau Center Mall. 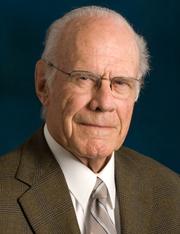