When asked what they owed their business success to, Art Juedes and Rick Gering smile and say “we were lucky.” Don’t you believe it. There probably was some luck involved, as there is in many successful businesses, but mostly it was hard work, long hours and plenty of support from their families that got them where they are today.

Art Juedes and Rick Gering were born two days and three houses apart on Wausau’s northeast side. The two boys grew up playing sports together and became lifelong friends. Eventually, they would also become business partners, but neither of them knew just how influential and important they would become to the Wausau community.

After graduating from college in the mid-1970s, Art coached high school sports in Union Grove, Wisconsin, and Rick coached track and field at UWSP.

In 1980, sports shoe companies were beginning to design and manufacture shoes specifically aimed at one sport or another. Art and Rick saw the potential. Their dedication to sports and athletics fueled their determination to make the best running gear available in north central Wisconsin. Along with running mate Don Trzebiatowski, they looked into shoe store franchises and found Dave Hill, who had started Milwaukee’s first running equipment specialty store, Eastbay. The original agreement included the use of the name “Eastbay” and required that merchandise be purchased through the Eastbay store in Milwaukee. That very day Art, Rick and Don brought back nearly $7,000 worth of shoes to Wausau and stored them in Rick’s family basement. They were in business…sort of.

The business that started in the trunk of a car soon occupied a full city block in downtown Wausau and mailed out 20,000 catalogs a week. Success brought attention from other companies interested in adding mail order capabilities to their businesses. Eastbay went public in 1995, and two years later the shareholders sold the company to Woolworth, a large sports equipment retail store. Woolworth, now the parent company, changed the Eastbay name to Foot Locker, Inc., in 2001.

As the company grew from the original 2 friends to more than 2000 employees, Art and Rick also developed a personal relationship with their employees, empowering them through a fun and enjoyable work environment that allowed a true central Wisconsin work ethic to emerge. Over the years, Eastbay has put on thousands of clinics, youth camps and performance seminars. The company has also sponsored youth programs and scholarships for area school sports programs.

Now retired from Eastbay, Art and Rick continue to devote time to charitable organization such as the Community Foundation, PAF, Wausau School Foundation, and the YMCA.

The North Central District of Junior Achievement is proud to recognize Art Juedes and Rick Gering as 2012 Champions of Business. 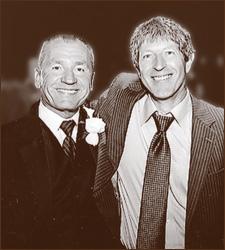