John Ringle was born Oct. 2, 1848 in Herman, Wisconsin. It was a time of promise — his parents had only immigrated to the United States two years earlier from Bavaria; and five months before his birth, Wisconsin officially became a state. Considered one of Marathon County’s pioneers, John was forward thinking, and his public service formed much our area’s civic and legislative foundations.

When John was eleven years old, the family moved to Big Bull Falls — not yet named Wausau. His father practiced law, owned several businesses and properties, and served as county clerk. John attended public school but with no formal high schools existing, was tutored until he was 17, when he became a teacher at the Stettin school. In 1871, he began working for Marathon County as deputy county clerk, and then was elected to fill his father’s spot, a job he held for six years.

He left public service and was involved in real estate and other businesses, such as serving as one of the original directors of the First National Bank of Wausau. He founded the Ringle Brick Company nearly by accident — his sawmill was on land containing clay, making the building slope and unstable. Closing the mill, John used the land’s clay mixed with hard shale to make bricks, which after firing gave Ringle bricks a distinct, singed orange color.

Lured back into a public role in 1879, John was elected to the Wisconsin State Assembly until 1882, when he was voted into the Wisconsin State Senate. He was instrumental in two significant issues: First, whether to divide Marathon County into two separate pieces, which didn’t pass. Second, he helped prevent the Wisconsin Central Railroad’s large land tracts from being tax exempt.

His first term as Wausau’s mayor began in 1884, where he is remembered for initiating city water service, approving the first municipal water plant construction and encouraging gas lighting installation. He returned to the State Assembly again in 1892 and served as the Wausau postmaster from 1894 to 1898. During this time, he was a member of the city council, chairman of the Marathon County board and was part of the Wausau Board of Education for thirty years.

John was elected mayor two more times in 1912 and 1914 when, despite opposition, he championed replacing downtown streets from old creosote wood planks to smooth pavement.

John was married three times. He and his first wife, Augusta, had nine children. After she died in 1894, he married Louise a year later, but she passed away in 1909. He married for the last time four months later to a widow, also named Augusta. He died at his home on March 15, 1923 in Wausau.

An unmistakable sign about John Ringle’s impact in our area is not only the namesake town; he was an exemplary public servant whose early and astute leadership helped shape our area’s future. 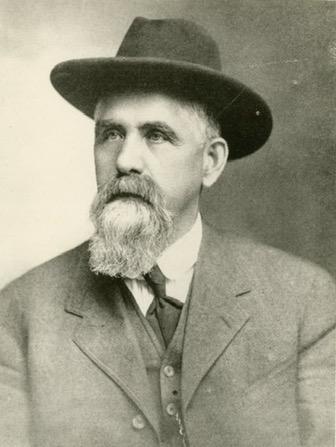