Next time you attend an event at the Grand Theater, listen to music while sitting on the green grass in The 400 Block, attend an art show at the Woodson Art Museum, or send a child to the YMCA’s Camp Sturtevant, pause a moment and give thanks to the late Bart Kellnhauser. Kellnhauser played a major role in the development of these projects and many more.

For more than 50 years “Kelly,” as most people knew him, used his remarkable leadership skills to help make Wausau the city it is today. It would not be a surprise if you haven’t heard of Kellnhauser’s accomplishments because he preferred to keep a low profile. The people who worked with him or were affected by his volunteer work knew him as a leader personified.

Kellnhauser was born in Menasha, Wisconsin, in 1924. He joined the U.S. Army Signal Corps during World War II. He married Patricia Sturtevant in 1947, and she preceded him in death in 2006. They had two children; John and Arleen (Kellnhauser) Ravanelli.

In 1954, Kellnhauser started a 34 year career in television. He started as a film director at WSAU-TV. The station was in its infancy, and the station and “Kelly” matured together. He was promoted to program director in 1956 and to President and General Manager in 1975. Kellnhauser served in the latter capacity until his retirement in 1988.

In 1993, Kellnhauser was recognized for his contributions to the growth of television with his induction into the Wisconsin Broadcasters Association Hall of Fame.

When Bart retired from his regular job, he picked up the pace as a volunteer. He was especially proud of his role as President of the Grand Theater Foundation, which helped renovate the theater in 1985 and completed the Arts Block in 2002.

When reviewing all he accomplished, one might think Kellnhauser never had time for fun. He did. He saved his biggest smile for the duck hunting season, when he and his closest friends would head north to their cabin for hunting and relaxation.

The North Central District of Junior Achievement is proud to honor Bart “Kelly” Kellnhauser as a 2012 Champion of Business. 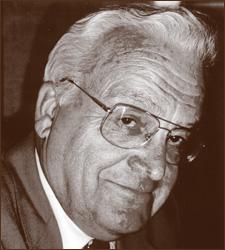